Nitric Oxide (NO) is one of the most important molecules produced in the human body for several reasons. The most important reason is because a NO deficiency puts you at risk for every type of age-related and chronic degenerative disease.

So what is NO exactly?

Nitric oxide is a gas that is produced in the lining of every blood vessel of every tissue in your body. NO is a vasodilator and works by relaxing your arteries and allowing oxygen into your tissues. This causes your blood vessels to widen — which increases your blood flow and lowers blood pressure.

In other words, inadequate NO production results in a higher blood pressure. This is why it’s considered one of the most important molecules for blood vessel health.

But there’s a problem:

NO production is complex and relatively new, so you can’t go to your doctor and ask what your NO levels are. (There are some emerging tests that can give you a rough estimate of your NO production capability by measuring your endothelial function. But it can’t tell you WHY you are NO deficient, only that you are deficient.)

Since we can’t rely on testing, we must rely on symptoms of a NO deficiency. As we get older, our natural levels of NO production are diminished. But diminished NO production usually precedes structural changes by many years, even decades — making early detection important.

In this article, we’ll reveal the 7 most common warning signs that you’re NO deficient.

Decreased blood flow is usually one of the first warning signs of low NO production. A loss of blood flow is also a precursor to every age-related and chronic disease because it has a vascular component (related to your blood vessels).

Sexual dysfunction also usually precedes an increase in blood pressure and cardiovascular disease, making this one of the first signs your body isn’t producing NO.

A 2019 study published in PubMed Central® suggested that interventions targeting the NO pathway in animals look promising at preventing the development of hypertension (high blood pressure) and kidney disease. But more clinical studies are needed to confirm this effect on humans.

Even degenerative brain diseases such as Alzheimer’s and vascular dementia have a vascular component because they reduce blood flow to your prefrontal cortex. The Indian Journal of Medical Research reportedly found that NO may play a prominent role in the treatment of age-related degenerative diseases such as Alzheimer’s Disease (AD). A later study found that loss of endothelial NO may be an important contributor to the pathogenesis of sporadic AD.

A 2010 study published in the Journal of Women's Health analyzed differences in blood nitrate (a precursor to NO) levels in patients with chronic fatigue and matched it with a control group after a physical exercise test. They concluded that NO levels had a bigger increase in the chronic fatigue group compared to the control group, suggesting that an NO deficiency could be behind chronic fatigue.

In 2006, the Journal of Neurochemistry studied the impact of NO in sleep deprived rats and concluded that NO was a powerful sleep‐facilitating agent. It also provided strong evidence that NO is necessary for recovery sleep. So insomnia and other sleep problems could be the result of low NO production.

A 2004 study in Biological Psychiatry investigated the link between major depression (MD) and NO production. MD is often associated with an increased cardiovascular mortality in patients with coronary heart disease. And decreased NO production has been associated with several cardiovascular risk factors. They found that both plasma NOx and platelet eNOS activity were significantly lower in subjects with MD compared to the control group, suggesting depressive disorders could be a warning sign of low NO production.

A 2010 study published in the Journal of Applied Physiology looked at the relation between NO production and exercise efficiency and exercise tolerance in healthy humans. They found that NO bioavailability appears to improve exercise efficiency, exercise tolerance, and increased the time to task failure during severe-intensity exercise in healthy humans. So if you’re getting winded faster during workouts or it takes your body longer to recover, you could be suffering from low NO production.

If you suffer from any of these warning signs, supplementing with nitric oxide could restore your health and prevent more serious issues later in life.

If you need a nitric oxide supplement, we have two options available.

Beets are one of the richest foods in dietary nitrates, which your body converts into nitric oxide. This powder is also jam-packed with essential amino acids which support increased blood flow, healthy blood pressure, reduced muscle fatigue, and boosts stamina. 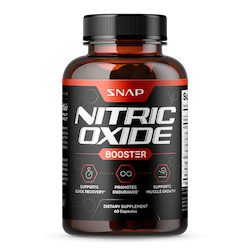 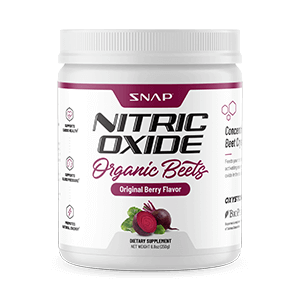